In My Driveway: Stuart and Bianca’s Škoda Kodiaq

We take a look at recent OnlineLoan’s clients, Stuart and Bianca’s 2019 Škoda Kodiaq 132TSI and the story behind it.

Fremantle residents, Stuart and Bianca, purchased their Škoda Kodiaq in October, 2021. The couple’s growing family, and need for multiple baby seats, meant that they were in need of something larger than their previous vehicle, a 2015 Volkswagen Golf. As we’ll find out, the Kodiaq ticked many boxes.

Stuart and Bianca financed the vehicle through OnlineLoans with a rate of around 6.4%. 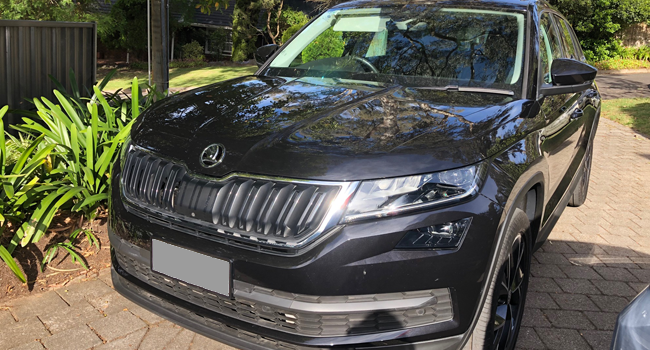 Why a Škoda Kodiaq?

34-year-old interior designer, Bianca, explains. “Honestly, I just wanted something safe and high enough to get my son in and out of without straining my back. The Golf was too low and baby seats weigh a lot – so does my 2-year-old!

“Stuart did most of the research, but we both came to the conclusion that the Kodiaq was the way to go.”

Stuart knows his cars. “I really wanted a Tesla Model X or new hybrid [Toyota] LandCruiser, but with the chip shortages and delays, the wait times and prices are too high. Also, Škoda is owned by VW which gives me a lot of confidence.

“I have to drive up to [mining] sites for work sometimes, so I wanted a comfortable 4×4 SUV with good fuel economy,” says geologist, Stuart. 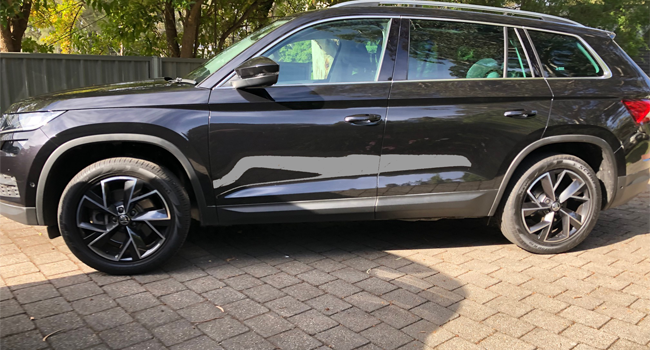 (Remote mining sites or childcare drop offs, Stuart and Bianca’s Kodiaq is up for it!)

“It all happened so fast”

The couple explained to OnlineLoans that they knew what they wanted, but were influenced by external factors.

New vehicle production has been hampered worldwide by semiconductor shortages, aluminum shortages and the COVID pandemic.

“We had saved for a holiday before COVID, but those plans kind of just sat in limbo. We used that money for a deposit on the car [Kodiaq].

“I read a lot of news about cars and the auto industry and it showed me that new and used SUVs are expensive at the moment, utes too,” Stuart explains.

Bianca agrees that it needed to be a quick decision.

“After we got pre-approved by you guys [OnlineLoans], we pretty much found one for sale and bought it.

“It all happened so fast,” says Bianca.

The couple told OnlineLoans that the ability to jump on a vehicle quickly was a huge plus.

“I was amazed at how fast some cars were getting bought,” exclaims Stuart.

“I actually found another Kodiaq in Queensland, I think it was. It came up on CarSales just as I got a work call, it was sold by the end of the call, unbelievable.

“You guys [OnlineLoans] got us pre-approved by COB the same day I entered my information so that’s why we were able to jump on this car.”

Some details have been changed/omitted at clients’ request.

If you’re not familiar with the brand, you’re not alone – however, that’ll change pretty soon. Škoda is making a big (and positive) impact on Australian motorists.

Here are some recent accolades:

There are many more.

The brand is much older than most people think. Škoda was established in 1895 in the central European country, the Czech Republic.

Originally called Laurin & Klement, the company manufactured bicycles before moving to automobiles in 1905. 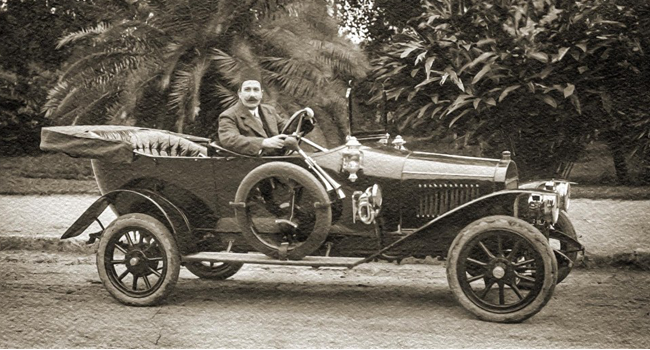 Škoda continued to manufacture cars but struggled with reliability problems in US markets which didn’t help their reputation, especially when trying to compete with giant US locals like Ford, GM and Chevrolet.

The 1980s proved a tough decade for Škoda with the brand’s reputation in Europe and the US tarnished by outdated models from the 1960s resulting in jokes among consumers. That all changed in the ‘90s.

Since mid 2000, Škoda has been wholly owned by VW. 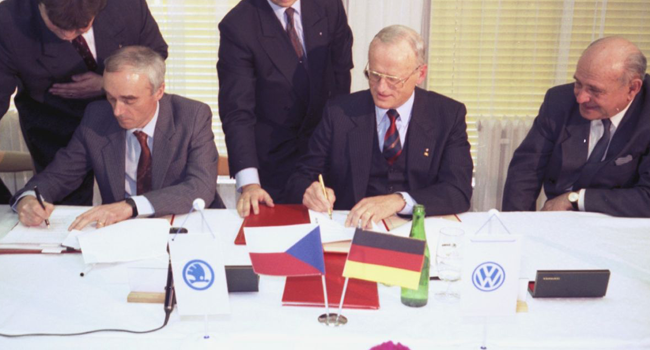 The VW takeover was a good thing.

A good thing for the company and its customers. With VW’s assistance and Škoda’s own experience, the perception of the brand dramatically improved over the 1990s.

Production ramped up to meet demand.

As of 2017, Škoda’s profit margin has been the second highest of the Volkswagen Group brands after Porsche.

“…the  Alaskan town of Kodiak actually changed its name to Kodiaq.”

Launched in 2016, the Kodiaq is Škoda’s largest SUV, although considered a 7-seat mid-size SUV. Being from the VW Group, the vehicle shares its platform with the Volkswagen Tiguan.

The name “Kodiaq” comes from the animal, the Kodiak bear. In fact, in May, 2016, the Alaskan town of Kodiak actually changed its name to Kodiaq. The name change only lasted one day, the 9th of May, as part of Škoda’s marketing campaign.

Alaskan authorities supported Škoda’s marketing campaign with local police and other services plastering over the final ‘K’ in Kodiak with a ‘Q’. Private citizens also joined in the spectacle. 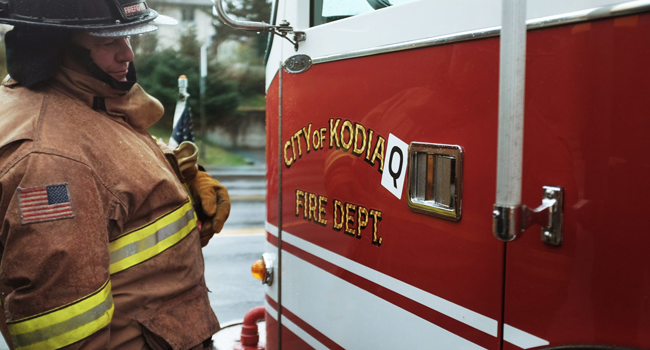 Back to the vehicle (not the bear).

All later models, like Stuart and Bianca’s 2019 model, come with Apple CarPlay and Android Auto. Furthermore, Škoda has gone to town on conveniences like little rubbish bins in the door storage compartments, roof rails, concealed umbrella inside the door and a removable torch (flashlight) in the rear, among other things.

The 270 litres of boot space turns into 560 litres with the 3rd row folded down, pretty good for family trips. Note that the rear cargo floor sits quite high.

The interior is a very nice place to be with minimal hard plastics or cheap-printed fonts on switches. In fact, you’ll find the opposite – solid switches, crystal-clear displays, pleasant to touch surfaces and a digital gauge cluster.

The seats and carpets match the quality with their leather (or alcantara, depending on trim level) finish as do the stylish door trims.

If you’re planning on punching through mud and puddles with dirty boots and fishing gear, the Kodiaq’s clean elegant interior might put you off any “inelegant” behaviour.

Škoda prides itself on delivering a high-tech experience. The Kodiaq comes with a ‘Virtual Cockpit’, meaning a digital and configurable cluster, wireless charging and clear, but not Tesla-massive, centre screen.

A panoramic sunroof, power tailgate and heated and cooled (by A/C, not just a fan) seats are also available.

From the ANCAP desk, the Kodiaq receives a full 5 stars along with 92% for adult protection and 77% for child protection.

‘Smooth and refined’ are two words that most drivers and passengers would use to describe the Kodiaq.

When accelerating, the 132kW engine glides through its rev range with the help of the 7-speed DSG transmission. It’s this setup that gives the Kodiaq its sophisticated feel, something you’ll want for daily commutes, shopping trips and road trips on sealed roads.

It’s not something you’ll want for creek beds with your HiLux and Ranger mates – which most Kodiaq owners probably don’t have.

But the Kodiaq isn’t trying to compete with off-roaders, despite its “4×4” brag. The Kodiaq offers Land Rover sophistication with Subaru XV practicality.

Grunt-wise, it is lagging a little. The petrol option, when fully laden, won’t win any races. The RS diesel gets considerably more at 176kW. A Toyota RAV4 gets around 152kW.

The Kodiaq can haul a 2000kg braked towing capacity.

If your weekends consist of kids’ sports games, a family trip out of town (with a well-behaved dog) and transporting some clean cargo, the Kodiaq ticks a lot of boxes.

As mentioned above, earlier Kodiaq models stepped away from the aggressive mid-size SUV look we’re familiar with. For example the Toyota RAV4, Land Rover Discovery Sport and even Kodiaq cousin, the VW Tiguan all have aggressive front end styling. 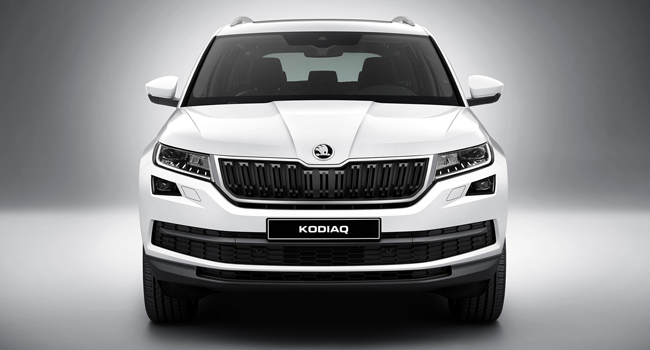 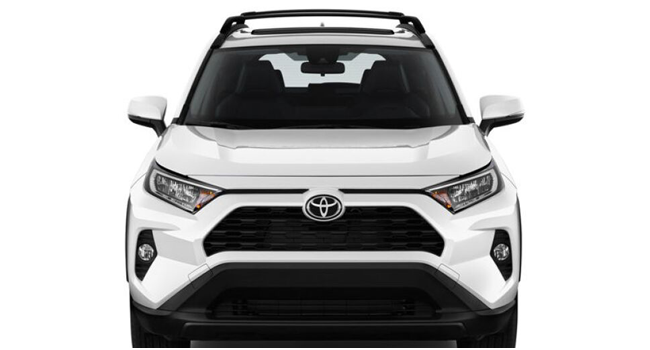 It seems Škoda got the message about the front end looks as they recently gave it a facelift.

From side and rear angles, the Kodiaq appears BMW-esque with its minimal soft curves and relatively sharp lines, an attractive look and period correct too. The short front overhang and not-so-high ride height give the impression that the vehicle prefers sealed highways with a touch of gravel tracks, or grass at least.

The big rims (20 inch) with their sharp spoke design also add to the impression. 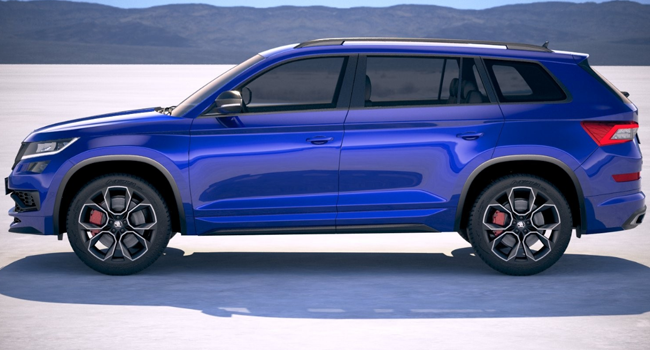 Get into a Škoda Kodiaq

As Stuart and Bianca mentioned, OnlineLoans gets things moving fast. This means you’ll have the buying power to get in quickly when you find a car suiting your lifestyle.